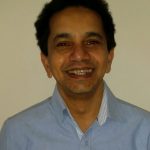 He currently leads a team who work together with a common goal to train the consultants of the future, so that children of KwaZulu-Natal benefit from the best surgical care available.

© University of KwaZulu-Natal: All Rights Reserved